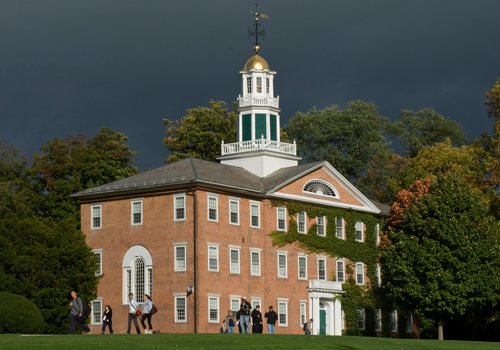 Griffin Hall was patterned after a Charles Bulfinch building at Andover Theological Seminary. The building reflects the Federalist influence in its Palladian west window, Doric entrance columns and beautifully windowed roof dormer. It originally had a double entrance and stood near Main Street. Griffin was moved to the northeast and remodeled in 1904.

Originally called “the brick chapel,” Griffin served as the college chapel until 1859 when Goodrich Hall was built. At that time, the building was re-named Griffin Hall. A library was built in 1847. In 1997 it was re-dedicated after a total renovation which turned it into the most technologically advanced classroom building on campus. The air conditioned building is currently used for classroom work and special meetings.