Named for Franklin Carter, 1965
Part of the Greylock Quad 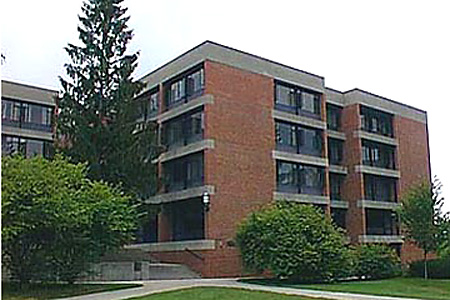 Franklin Carter House, commonly known as “Carter,” is a part of the Greylock Quad — known for its brick, slate, and cement architectural features. Carter boasts rooms with huge windows that look over the quad and toward the Williamstown Town Hall. Residents will find small singles arranged into suites with common rooms, and a beautiful kitchen. The Greylock Quad, comprised of Bryant, Mark Hopkins, Carter, and Gladden, is close to the ’62 Center for Theatre and Dance, and has an easy-access path that leads students to the Paresky Student Center.

Carter is used for upper class student housing. It’s five floors house 70 single rooms. It has no air conditioning. Carter is part of the Wood Neighborhood.

Covid-19 is an ongoing concern in our region, including on campus. Safety measures are in place, and campus community members and guests are additionally advised to take personal precautions. See the college's Covid-19 website for information about campus policies. For the latest research and recommendations from the CDC, visit cdc.gov/coronavirus.